Learning how to set boundaries after living with little to none for the majority of our lives is not easy. We may know what we need to do to set better boundaries, but actually putting that into practice is its own challenge.

Creating boundaries can be especially difficult for those with trauma and a fear of conflict. But, as with everything else in life, practice makes perfect. And the best way to learn to set healthy boundaries is by consistently putting these four tips into practice.

Most of the time, those of us with unhealthy boundaries don’t recognize who’s overstepping our boundaries. We may realize that being around certain people and specific things people do make us uncomfortable, but may not recognize why.

A great first step is taking a break from people around us. For example, if you have that one friend that you feel bad after hanging out with too much, distance yourself from them for a short while. This can help you think back and reflect on what the issue may be. Once you’ve done that, create a list of things that made you uncomfortable in the past. This list will allow you to understand what your boundaries need to be. For example, if you come to the conclusion that your friend asking too many personal questions makes you uncomfortable, now you know that you need to communicate that boundary to them.

This tip may not work for professional relationships, for example, as we may not be able to take a break from those or communicate our boundaries as much. However, taking a step back from personal relationships and recognizing what makes us uncomfortable will allow us to utilize that in all types of relationships.

The best way to communicate your boundaries is to let people know ahead of time that you need to talk to them. You don’t want to catch them off guard during a random outing. Set up a time when you’re both relaxed and if they aren’t toxic or don’t have unhealthy boundaries themselves, then they will most definitely understand and respect you. On the other hand, if you’re met with a not-so-great reaction where they take it too personally or accuse you of being arrogant or whatever it is, then maybe it’s time to revaluate that entire relationship. Healthy boundaries only work if both sides are willing to respect one another.

This step can be scary for a lot of us, but it’s extremely necessary. You don’t have to communicate all your boundaries during one conversation. Take it one boundary at a time if you need to. The important thing is to get the conversation started so that it’s easier to bring it up in the future.

A great way to put your boundary setting into practice is saying “no” without giving any explanation at all. It’s not a surprise that when we struggle with boundaries, we also struggle with saying “no”. And if we do say “no” we often have to give a bunch of excuses or over-explain ourselves.

For example, if someone asks you out to lunch, simply say “I can’t make it” and if you really want to, then reschedule with them. However, there’s no need to say something like “Sorry, I can’t make it. My dog is sick and I have a lot of work to do” and you just go on and on so that the other person doesn’t feel bad about the rejection. The reality is, no one needs to know your reasoning for anything. I know saying “no” is difficult enough, but you have to learn to respect your own boundaries as well. And if someone asks “Why not?” you still don’t have to answer them. Just reiterate that you can’t make it.

You have to show that you have boundaries so that people don’t overstep every other boundary that you have. Don’t worry about sounding or looking “mean”. At the end of the day, we all need to protect ourselves, and doing that isn’t rude.

Practice Awareness of Your Boundaries

The previous steps wouldn’t be effective without self-awareness. Even if we were aware of our overall lack of boundaries, we might not recognize when we are allowing others to overstep them.

Frequently reflecting is extremely important. When we lack that awareness, we must make time and sort of force ourselves to become aware. A great way to do this is to journal. Whenever you’ve had a day when you’ve been around others, make sure to journal at the end of it. Think about any instances when you struggled to say “no” or when you felt like you had to answer every question even if it made you uncomfortable.

What makes this step so crucial is that it helps us validate our feelings. When we’ve been around people that overstep our boundaries or that manipulate us and make us believe that our feelings of discomfort towards their actions are all in our heads, then we may start to believe that too.

Everyone’s boundaries are different, so just because someone else is comfortable with something, it doesn’t mean that you’re wrong for not feeling the same way. Trust your feelings and believe them.

When we’ve lacked boundaries for so long, it’s not unusual to have also attracted the wrong people in our lives. Of course, this doesn’t mean that you should cut off everyone in your life, but be prepared to lose some people.

1- Take a break from being around others. Reflect on those relationships and create a list of things that made you uncomfortable in the past. Now create a list of boundaries you need to set.

2- Who do you need to communicate your boundaries to? Set up a time to have a conversation with them.

3- Whenever you say “no” to someone, refrain from giving any sort of explanation for it.

4-Pick a time to journal every day. How did your social interactions go? Were there times when you felt uncomfortable? What new boundaries can you set? 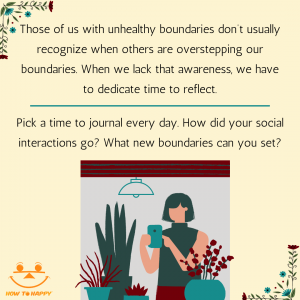