Guilt is a necessary emotion. Without it, we would be unable to acknowledge or learn from past mistakes. However, constant guilt can be unhealthy and detrimental to our well-being.

Many people, especially those with past trauma, deal with constant irrational or unexplainable guilt. This means that instead of feeling bad about something they actually did or caused, they experience feeling guilty regularly without a clear reason as to why they do. This results in self-loathing, feeling unworthy, and lots of self-blaming.

All these feelings, especially feeling unworthy of anything good, can really hold them back in life. Becoming aware of these three ways guilt may be holding you back is a great way to start your healing journey.

Guilt Prevents Us From Pursuing Goals

Guilt makes it difficult for us to live for ourselves. When we feel undeserving of any good, it becomes almost impossible to do things simply because we want to. We usually need external validation which is why we might find ourselves allowing our parents or people in higher authority to control what path we take in life. This doesn’t necessarily mean that we don’t have goals or don’t want to be successful, but rather that we’re living by what others want our success to be. Why do what makes us happy if we feel undeserving of it?

Guilt also makes it challenging to have positive thoughts about the future. So, even if we were to work on pursuing our own goals, we may get so discouraged due to our lack of self-worth and confidence. This can result in us eventually giving up on them without trying much.

Feeling discouraged about the future and following what others want us to do both prevent us from becoming successful. Success doesn’t always equate to getting that job or making a lot of money. Accomplishing what we desire is the ultimate form of success. Working on our guilt can help us do what we desire and experience that self-fulfillment that’s lacking in our lives.

Allow Others To Cause Us Harm

When we feel unworthy of any good, that often means we also feel undeserving of love. Ever wondered why you struggled to work on your boundaries despite wanting to? It’s because you don’t really feel like people are doing anything wrong when causing you harm.

Guilt makes us believe that we deserve to be punished. For example, if a friend constantly stands you up and makes you wait for them for hours, you may believe that that’s acceptable behavior. Even if you’re completely aware that it’s wrong and that you would never do that to someone else, when it happens to you, you’re unable to see an issue with it. This doesn’t mean that you’re not bothered by it, but rather that you won’t do anything about it.

Allowing others to harm us, emotionally or physically, is also a form of self-destruction. It’s not uncommon for those struggling with the weight of unbearable guilt to use self-harm to cope. This can be in the form of self-injury, lack of boundaries, or preventing ourselves from becoming successful.

When the weight of our guilt is lifted, we will not only find that we have better boundaries, but also that we’re engaging in self-care and being kinder to ourselves.

Guilt Slows Down Our Recovery Progress

If you struggle with any type of mental illness, whether that be depression, anxiety, or addiction issues, guilt can be the underlying reason why you’re not seeing much progress when trying to recover.

If you’ve been in therapy for a while but can’t seem to feel happy or move on to the next step in your recovery journey, then it’s time to explore your feelings of guilt and self-worth. The overwhelming majority of us with a mental illness also struggle with irrational guilt. Not only could that have been a barrier in seeking help in the first place, but also one to staying on the right track.

That guilt is complex because, although it might be irrational, we don’t recognize that it is as we blame ourselves for our struggles. It’s like an endless loop. We deal with irrational guilt which makes our mental illness struggles worse, and then those struggles make us feel guiltier. Recognizing this is the first step. Sometimes, we might not realize that we’re feeling guilty; we might think we’re simply feeling down or bad about not doing enough, but that it is in fact irrational guilt.

When you understand that, you can begin to work on it. For example, if you’ve been talking to a therapist about your depression but never verbalized that you feel guilty, that may be something to bring up and work on during your next session. You’d be surprised how much addressing your guilt will aid in your recovery.

Guilt stems from feeling a sense of responsibility, even when it comes to things we have no control over whatsoever. Constantly reminding ourselves that we aren’t responsible for our struggles, or how others view us, is a major first step to letting go of guilt.

I know this all sounds easier said than done, but, it is possible to live guilt-free. If you feel like you can’t work on it alone, then seek professional help or talk to someone about it. Having an outside perspective of things is great as we don’t often realize that our guilt is irrational.

1- What’s something you feel guilty about? Does your guilt make sense when it comes to that specific situation?

2- Anytime you experience irrational guilt, reflect and don’t ignore it. Imagine yourself as a loved one and journal 3-5 reasons why they deserve to not feel guilty. 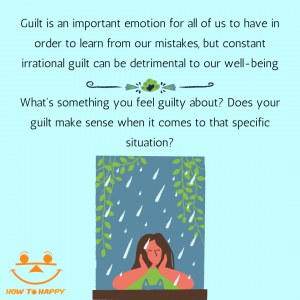